Overlooking Malaga, the Alcazaba fortress represents an important legacy of the city’s history.The Alcazaba is one of the best preserved Moorish fortresses in Spain. When it was built it was adapted to the topography of the mountain, which it shares with the Gibralfaro Castle, situated up on the hill. It was built in around 756-780AD during the kingdom of Abd-al-Rahman I (the first Emir of Cordoba), on the ruins of Roman fortifications. Then it was rebuilt and finished between 1057-1063AD by Badis Al-Ziri (Sultan of Granada). As a fortress, its purpose was to protect the city from enemies and pirates.

Some of the Alcazaba’s fortress walls have been restored but as soon as you enter, you start feeling like a Moor living in the 11th century. It is just amazing! The entrance to the ticket offices is by the ruins of the Roman amphitheatre. You have to buy the ticket at a machine, so take cash with you. My advice is to go with enough time, as it might take you a couple of hours to walk around. There are so many little corners to stop at for a great photo!

The first Moorish-style gate you will see is Puerta de la B?veda (Gate of the Vault). This was the entrance to the fortress. From there you will follow the way up through the walls, passing a series of Moorish gates, such as Puerta de la Columnas (Gate of the Columns) and finally El Arco de Cristo (Arch of Christ). The Arch of Christ was actually the real entrance to the Palace. It was built in this way to make progress uphill tricky for attacking enemies. If you don’t feel like walking up, there is also an elevator but you will miss much of it.

As you are following the way up, you will see some original Roman columns found at the fortress, as well as two tombstones. I strongly recommend stopping and walking up to every little corner or wall you can. The best views of the fortress and the city are in the hiding places.

After passing through the Arch of Christ, to the left there is an astonishing little garden, with fountains and birds playing around, just like in a Disney cartoon! This is a nice place to sit down, enjoy the amazing view, and rest, because there is still a lot to see uphill. After the garden we come to the Palace and inside there is a museum with an exhibition of Roman pottery and Moorish ceramics, plus other items found in the Palace. It is easy to get lost in these rooms and patios; just make sure you do not miss any of them as each one is unique. I could imagine the privileged Moorish rulers and their families living their lives between these walls. 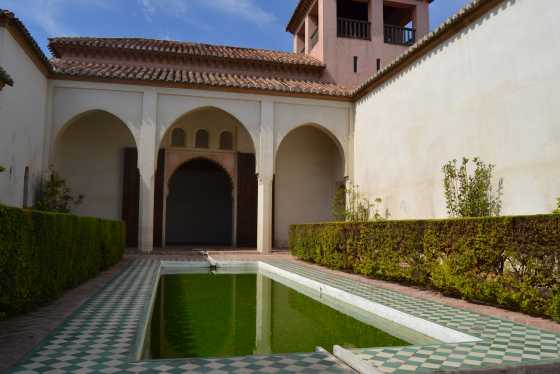 If you look more closely at the Palace walls you will see plenty of architectural and decorative Moorish details, preserved from the original construction. One of my favourites was Cuartos de Granada (Granada Quarters), with its characteristic arches, decorated ceiling and wall tiles.

As I mentioned before, there at the top of the Palace, as on your way uphill, do not hesitate in trying to reach every little path and every step. The views of the city and the port are just breathtaking.

If you have time, you can complete your day by also visiting the Gibralfaro Castle, located a few minutes? walk away from the Alcazaba. 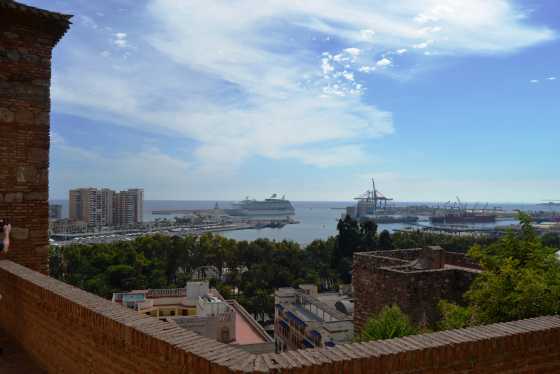 How do I get there?
Entrance: by Plaza de Aduana and the Roman theatre in Calle Alcabazilla 2. City Centre.