In the heart of Malaga on Plaza de la Marina the city has erected a statue of the famous writer, Hans Christian Andersen and the Danish author visited the city in 1862 and later he wrote about Malaga “In none of Spain’s cities have I felt as happy as in Malaga.” The famous author’s words of praise for the city still hold.Malaga city has over the last five years undergone a tremendous change, and is a Spanish alternative to the sometimes bustling city of Barcelona. The capital of Costa del Sol offers plenty of culture, gastronomy, sunshine and cheap flights from many of Europe?s big cities.

Malaga
Malaga is Spain’s sixth largest city and with approximately 600,000 inhabitants. The historic centre has in recent years undergone a renovation and old historic buildings have been restored, squares renovated and the infrastructure has been improved. It has brought a huge boost to the entire city centre and chic restaurants and trendy bars attract every day lots of people to the heart of the city.

Costa del Sol
Every year thousands of tourists head to the Costa del Sol and the vast majority choose to organize their vacation in the small towns such as Torremolinos, Fuengirola, Marbella or Torrox. Here you will find the well known tourist paradise with beach and lots of other tourists. Malaga city has however always been overlooked and it is only in the last five years the city has experienced an increase of tourists.

Sun and Beach
Malaga?s wonderful climate gives you the opportunity to visit the city all year and even in winter you can experience lots of sun and 20 degrees and it is not uncommon that you can sunbathe in November. The lovely Malagueta Beach is located only 1 kilometer from the historic center and here there are lots of pretty cozy “chiringuitos” where you can enjoy one of Malaga’s specialties consisting of freshly caught fish and a glass of local wine. 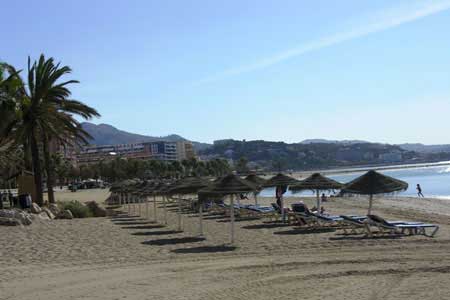 Gastronomy
Spain is known for fine wines, air dried ham and tapas and none of these things are missing in Malaga. In the heart of the city there are an abundance of tapas bars, restaurants and bars and the food is exquisite and prices are extremely reasonable compared with countries in northern Europe. If you can avoid the tourist traps, then you can easily have a great meal for two persons for the price of ? 20-25 incl. beverages. 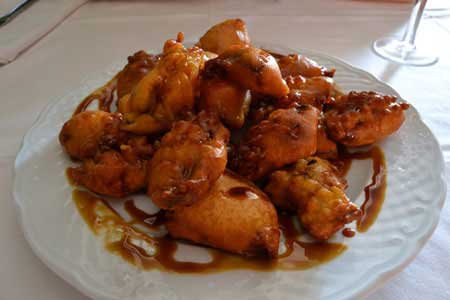 Culture and sights
The famous painter Pablo Picasso was born in Malaga in 1881 and he is undoubtedly the city’s pride. In addition to his birthplace on Plaza de la Merced, you can visit Museum Pablo Picasso in the city centre where you can enjoy 233 works by the artist. Carmen Thyssen Museum, which opened in 2011, is another major art museum and here you can see the works of several well-known Spanish and foreign painters.

Southern Spain offers many places of great mark of the Arabic Mauer, who reigned until 1492. In Malaga city centre you can see the Moorish Alcazaba fortress and the Castle Gibralfaro. The city’s landmark and pride is the beautiful Cathedral, which is characterized by the lack of a tower. 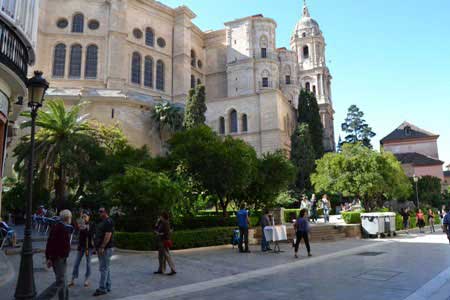 The Arab tycoon Sheikh Abdullah Bin Nasser Al-Thani of Qatar bought the local football club Malaga CF in 2012 and he has invested much money and picked players like Ruud van Nistelroy, Santi Carzola and Joaquin to the club. This season the club has sold 26,000 season tickets and the whole city is full of optimism and expects that the club qualify for European football next year.

Every year there are two major cultural events: Holy week and The Fair in August. Here you have a great opportunity to experience all Andalusia’s many traditions such as flamenco, bullfights, fireworks and lots of happy people.

Muelle Uno
In December 2011 Malaga’s new harbor area Muelle Uno was inaugurated and now the city offers great shopping for the many cruise passengers who visit the city every year.

Transportation
Many of Europe’s big cities offer direct flights to Malaga and the large low-cost carrier Ryanair offers no fewer than 50 direct routes to Malaga. The big competition benefits the consumer and you can sometimes find real bargains to Malaga. Malaga’s new airport was inaugurated in 2011 and you can get directly from the airport by train every half hour to the historic city centre in 15 minutes.

See our holiday apartments in Malaga