The match Malaga CF vs Eibar?

The 20th of September 2016, Solaga went to La Rosaleda stadium in Malaga to attend the match between Malaga FC and Eibar in the Spanish La Liga. The atmosphere was special and the home team played at times tiki-taka football. Sandro created faith among the 19.318 spectators and evened-out the score?to 1-1 just before half time.

The atmosphere was intense with moments of both joy and frustration. First it was the referee who was the villain, then it was an Eibar player who caused a hissing and suddenly all was replaced by a round of applause from the fans for the home team. In Malaga we support the Blue and Whites and as a Spanish fan we apply two rules: the first rule is that you have very high expectations for your team, and second is you are very enthusiastic about the game. In Spain football is like Bill Shankly once said:

?Some people believe football is a matter of life and death, I am very disappointed with that attitude. I can assure you it is much, much more important than that.?

Therefore, the cheers broke out at La Rosaleda as En-Nyesri made the winning goal for Malaga in the 76th minute. Attending a match at the Rosaleda stadium is definitely worth a visit. A great home crowd, good football, fair ticket price and 3 points make the experience fantastic. 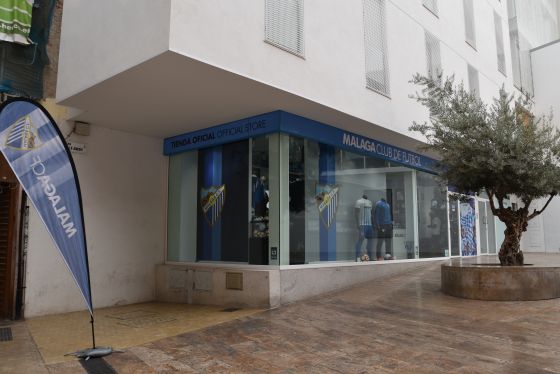 How do you buy a ticket??

If you want to witness?Malaga CF playing home at La Rosaleda stadium, we present you 3 ways to purchase the tickets. The first one is on the Malaga CF website with tickets starting at?15 ?. Another option is to visit the Malaga Fan store in the centre of Malaga. The store is located at Plaza Juder?a 1, 29015, M?laga, but please notice the opening hours: 10:30 – 14:30 and 16:30 – 21:00. The third option is at La Rosaleda stadium. We bought the tickets in the fan store in the city centre?and the staff was very helpful. If you don’t speak Spanish, they can still help out in?very basic English. 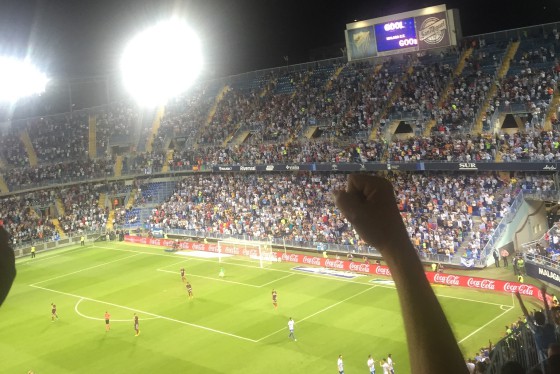 To the stadium by bus

The stadium is situated 1,8 kilometres from the city centre (Plaza de la Constituci?n). That means you can jump on a bus, pick a taxi or walk there. If you choose to go by?bus take number 2 or 17. We went with bus number 2 from stop 201, Alameda Principal Norte, and got off at stop 206 Jorge Silver – Cruz Roja and were at the stadium a couple of minutes after. The ticket costs 1,30 ? and the bus ride takes around 15 minutes. The bus drives every 10 minutes, so it is easy to be in time for the beginning of the match. After the match we followed the crowd of people towards the centre of Malaga. In 20-25 minutes we reached the Plaza de la Constituci?n.

Finding your seat is the most difficult part of the whole experience. On your ticket it says puerta, that is the entrance and is quite easy to find. After that is when it gets complicated since in the search for your seat there is no information about where to go?inside the stadium. It’s a challenge to find your row (fila) and seat (butaca). ?Granted that without the help of local fans and the employees of Malaga CF it makes the task even harder. No doubt you will find your seat, but it can be tricky, if it’s your first time at the Rosaleda.