Soccer fans will have one more reason not to be bored in the city of Malaga. The?Rosaleda?Stadium, where Malaga FC (Malaga Football Club) has their official field can be visited and toured. The team, founded in 1948, currently plays in the first division of Spain, according to the league.

After some economic problems in the club, its former president, Fernando Sanz, seeking the help of investors in Qatar, finally negotiated with Sheikh Abdullah bin Nasser Al Thani, who was awarded the team. After some changes were implemented to the equipment and the acquisition of new players, the team was able to harvest victories that allowed them to remain in the category. In August 2012, Malaga FC for the first time in history, got into the UEFA Champions League 2012/13.

The main Malaga FC strip identifies with the main colours of the team badge, blue with white stripes. 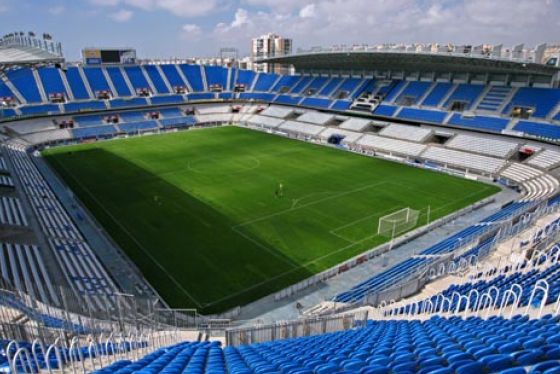 The?Rosaleda?Stadium, opened in 1941, and is the official home of Malaga FC. It has capacity for 30,044 spectators, a natural lawn and is 105 x 68 meters. It was built by the architects Henry Atencio and Fernando Guerrero Strachan, and was refurbished in 2000 and 2006.

The name ?Rosaleda? which means rose, comes from the fact that the construction was built on the grounds of a rose garden.

For football fans who are curious, the?Rosaleda?stadium also has a Museum and offers a Tour of M?laga Football Club. You will review the most emblematic moments of the club and the most remote corners of the Stadium during this tour. You will also get to go out onto the field, experiencing first-hand what the players feel?before each game. The guided tour takes about an hour. Here are the details of the Museum & Tour of M?laga Football Club.