Everyone says, “If you have not been to El Pimpi, you have not been to Malaga.”?This bar, restaurant and wine cellar opened its doors in 1972. Since then it has become an icon and institution of Malaga.It is visited by all kinds of people every year and is very popular among locals, tourists, artists, writers and politicians.

It owes its name “El Pimpi” to a popular character from bygone Andaluc?a, dedicated to “catching” seamen and visitors who arrived in the port by ship, with the aim of offering their tour services around the city. This character no longer exists, but like its namesake, El Pimpi will surely show you a lot about the gastronomy and culture of Malaga.

The building where El Pimpi exists nowadays used to be the stables of the Count of Malaga’s Palace two centuries ago, then years later it was a convent and after that a party venue. There is no doubt that these walls could tell many tales about Malaga?s history. 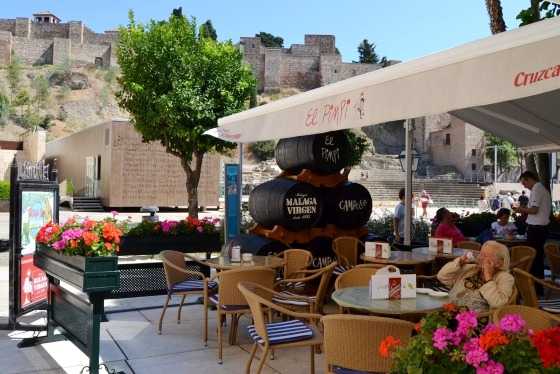 El Pimpi has two entrances, a small one in Calle Granada and the main entrance next to the terrace in Jardines Alcazabilla, just opposite the ruins of the Roman theatre. If you arrive through the terrace you will surely be received by Blanca Calzada as we were. You will recognize her because she wears a typical Spanish dress and stands on the terrace offering a wine tasting in an original way called “escanciado” by Spaniards (translated as something like pouring). The “escanciador” (the person who serves the wine) is kind of artist. They take the wine from the barrel using a type of long stick with a little glass at the end and serve it from above their heads into a little shot glass that they hold in the other hand. The photo below will certainly explain it better! 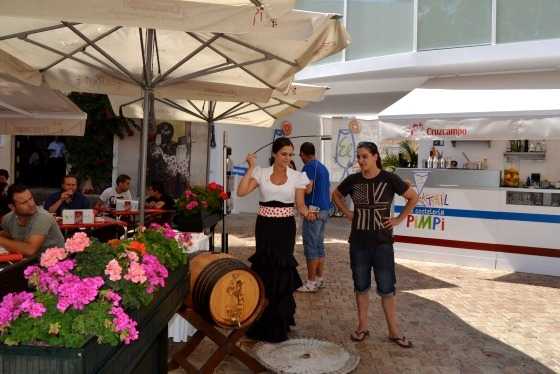 El Pimpi is divided into the Bodega-Bar El Pimpi and Pimpi Marinero. Pimpi Marinero was opened this year, featuring a modern seafood restaurant, decorated all in white and with a really wide variety of cocktails. It is a total contrast with the Bodega-Bar, which is just to its left, sharing the terrace with Pimpi Marinero. The Bodega-Bar is the one you cannot miss. It includes six different rooms but some of them are open just for special events. My favourite one is the Barrel Hall (the first one you will see when entering from the terrace). It is decorated with lots of wine barrels autographed by all the famous people who have visited El Pimpi, with an impressive collection of traditional bullfighting posters on the walls alongside plenty of old (and new) photos of the most famous visitors like Antonio Banderas and Melanie Griffith, the Duchess of Alba, the Picasso family or Carmen Thyssen. If you are curious about the photos, you can actually check them out on their website. The terrace is also a lovely place to be, especially during summer, with amazing views of the old Roman theatre and the Alcazaba of Malaga. 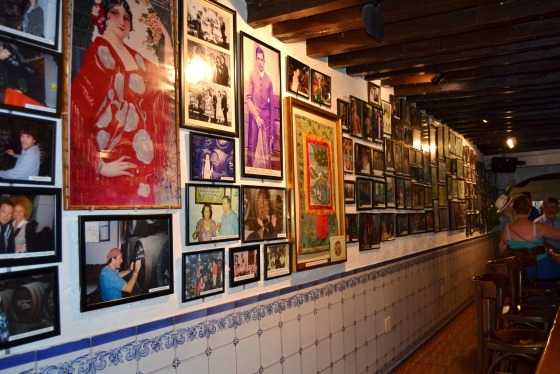 El Pimpi in Malaga?is famous for being a cultural meeting point, holding cultural debates, reading clubs and folk music and dance performances. In fact, if you like flamenco, do not miss the live flamenco music on Thursday nights!

Talking about food and drink, El Pimpi is also a perfect representation of the culture of Malaga. Firstly, you need to try the typical sweet wine from Malaga, Moscatel, Malaga Virgen or Cartojal. It is served in little shot glasses (from 1.90? to 2.50? per glass or the 375ml bottle for 9?). But be careful, because the sweet taste can fool you and after 4 or 5 of these little glasses you will notice the effect! While drinking this fabulous wine you can choose from about 70 types of tapas and dishes. My recommendation is Iberian ham (half portion, 9?) with goat?s cheese (8?) and a plate of traditional fried fish to share (9?). See the full menu on their website.

How do I get there?

El Pimpi is located in the historical city centre. It has two entrances:
Calle Granada, 62 and Jardines Alcazabilla, 29015, Malaga.