If great temperatures and sunny winter days are not enough, we’ll give you a little preview of what Christmas in Malaga looks like. More than two and half million Christmas lights decorate the historic city centre of Malaga every year. Turning on the city?s Christmas lights is a massive event; this year it was celebrated on November 29th in the famous Plaza de la Constituci?n with live music and attractions for the family. The arrival of the lights is quite popular for Malague?os because it means the start of the Christmas celebrations.

During the evenings, the streets are packed with people coming from the whole city to see the lights and decorations along the main street, Calle Larios. This street is well known for being paved with marble and for housing some of the best fashion brands, bars and coffee shops. One can be amazed by so many beautiful lights as far as the eye can see along Calle Larios. Every year the design of the lights changes, and every little street in the city centre will have a unique and colourful decoration. 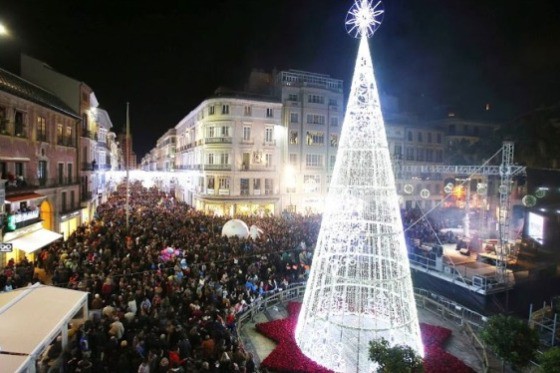 Spaniards are, in general, Catholics. Therefore Christmas celebrations in Spain are full of religious traditions as they celebrate the anniversary of Jesus? birth. It is very typical for Spaniards to display little statues of Jesus, Joseph and the Virgin Mary in their homes, simulating the Nativity scene. The Cathedral displays a beautiful Nativity scene, and most of the churches have their own one, which is visited by their community members. People prepare their own tours to visit each one of them.

“Noche Buena” or Christmas Eve
On the evening of December 24th, the celebration is with the family. The most religious go to church at midnight. Others meet with their extended family at home where they have an endless meal (usually a feast with lots of food). The dishes that are always on the table are “tapas” jam?n serrano (cured ham), olives, Manchego cheese and prawns, and for mains it can vary between seafood, turkey, chicken and the typical Spanish paella. Then after all this, desserts like turr?n (nougat candy) or roscos, wine, beer?

Spaniards usually open their presents on January 5th when the Three Kings or Three Wise Men arrive. Christmas Eve is more about spending time with the family and enjoying a good meal.

“Noche Vieja” or New Year
As in many other places, New Year in Spain means party! Most people get together again with their family for a feast and some drinks, and others decide to share it with friends in their houses or at New Year parties around town. If you fancy some drinks in a crowded bar, head up to the city centre, it will be full of “happy” people hungry for a party!

“Llegada de los Reyes Magos” or The Procession of the Three Kings
Spaniards place a great deal of importance on the Three Kings who brought Jesus gifts when he was born, and on January 5th every city in Spain celebrates a procession dedicated to them.
In Malaga the procession takes places towards the port. Around 5pm, the parade starts. Thousands of parents with their children start walking in the direction of the port, where the Three Kings will arrive on a boat bringing their presents to Malaga. After that, the parade goes around the city, with more than 30 floats with different themes moving through the main streets of the city.

On this day, most of the little ones receive their presents, brought by the generous Three Kings.

Christmas food
In Spain the food is always one of the main stars. Whatever the celebration, there will be always delicious food around. Therefore, there is some special food that you can just find during the months of November and December; they are hard to find during the rest of the year and that makes them more desirable! One of the most typical is “turr?n” which is a nougat candy made from almonds. There are at least 15 different types of turr?n, they are all delicious. You can also find “mantecados” which are sweets made from lard and powdered nuts, or roscos, which is a kind of sweet bread filled with cream or pastry. Really popular for breakfast after a party are “churros”, a fried pastry made from flour and eggs. Yes, be prepared to put on weight during a Spanish Christmas! 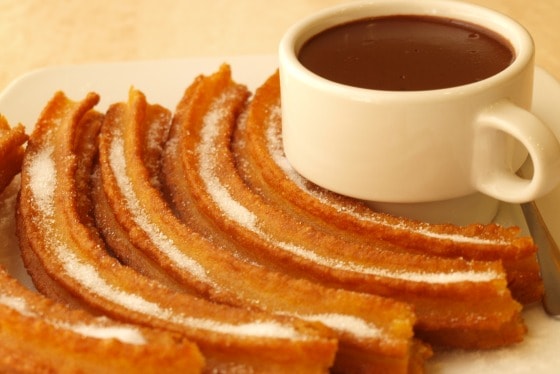