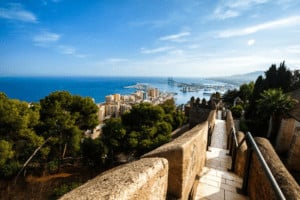 Rumor has it that it took over 2000 years to build the Great Wall of China, that?s about the same time it took to build Malaga ? and trust me, we?re not done yet. The Phoenicians established a port here in the 7th Century B.C. coinciding with the beginning of the building of Chinese Wall. The only difference is that China completed it throughout its various dynasties, while Malaga is still very much under construction. In case you haven?t noticed, the city is a never-ending Pharaonic building site. Part of the problem is precisely because of its lengthy and rich past. Every time the excavator takes a scoop of earth, a major Roman archaeological treasure seems to pop up, blocking further construction for decades (that, and the fact that workers seem to be taking way too many coffee breaks). ?So for the last 2000 years, we?ve all learned to live in an ever-changing landscape, but, after all, that is part of the city?s charm.

Metro, did you mean… bus?

Since 1961, when the tramway did its last run, there have been discussions of giving birth to a new light tramway. But instead, in the early 2000?s an agreement was signed to build a Metro in its place. One might ask: does Malaga really need a Metro? It would seem that there are more economical ways to improve the public transport network in our city without having to get into such a complex and costly exercise. But hey, we don?t want to stay behind our big sister (and lifetime rival) Sevilla. So in 2006, works on the Metro started, and yes, we are still waiting for its completion. Anyone who has gone to the famous department store El Corte Ingl?s in the last decade might have noticed that the site has now been under construction for the last 10 years. That?s right, works on that particular line started in 2010 and are not due to be completed until 2020. ?It?s probably best not to ask why (if not, refer to previous point about the Great Wall of Andalusia). This makes me wonder: can you actually see the Corte Ingl?s Metro station from outer space??

Honey, have you seen my other hand? 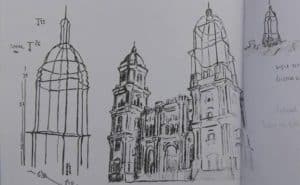 Most visitors will have noticed that our Cathedral is unfinished (missing one of its towers), hence its nickname ?the one-handed?. One might wonder if it?s because construction workers are still on their breakfast break or might have been re-assigned to the Metro project. ?Legend has it that the money that was originally earmarked to finishing the Cathedral was sent to the Americans fighting for their independence from the Brits. And since then, it would appear that Americans forgot to send us the money back or plan on using it to build their own Great Wall on their southern border. ?How ungrateful of them when annually we celebrate on the 4th of July our local hero, Bernardo de Galvez, a Malaga soldier who fought along with the American colonists against the British in Pensacola.

And every year, without fail, discussions take place among local officials on whether we should complete the construction of the Cathedral or not. If we decided to finish it now, it would have taken a grand total of 500 years to complete it, which, I suppose, if you were to compare it to the Metro project or the Sagrada Familia in Barcelona it seems to be perfectly reasonable. It is estimated that it would take about a year to complete the project with a cost of 10 million Euros. The question is: will there be a subway line taking us from the Corte Ingl?s station to the new two-armed Cathedral?

One espresso please, shaken not stirred 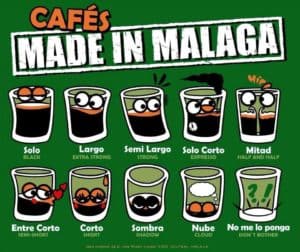 If you think that it?s annoying to order a coffee at Starbucks, having to choose between a tall, low-fat latte with caramel drizzle and a triple, sugar-free, soy, no foam macchiato, you wait until you come to Malaga and ask for a simple black coffee. You will soon find out that there is no such thing. You will be asked by the waiter to choose between at least 10 types of coffee to milk ratios to find the right one for you. All this because some 50 years ago, the owner of the Caf? Central came up with a measuring system to find the right amount of milk to be added to your coffee, tailor-made to each customer and to avoid milk wastage in times of crisis. This system has now been adopted by the entire city where you can often hear people ordering a ?cloud? or a ?shadow? in a bar. To complicate matters a bit, you can ask for your milk to be half hot, and half cold, served in a cup or in a glass. So if you are out with a group of 4-5 friends, don?t be surprised that it will take the waiter about 10 minutes to take the order. The best part is that no matter what you ask for, he will most likely bring it to you however he feels like it.

I, myself, usually ask for a simple espresso, just to throw him off. 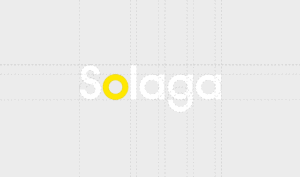 It is believed that the name ?Malaga? comes from the Phoenicians name ?Malaka?, term first coined in 770 B.C.

It is believed that the name ?Solaga? comes from its founder, Steffen Hansen, who combined the words Sol (sun in Spanish) and Malaga (refer to above), term first coined in A.D. 2008

We don?t believe that there is any connection whatsoever between those two facts but we needed to mention ourselves somewhere in a very subtle, subliminal,?product -placement kind of way.??

So if you want to come experience our wonderful city with its singular Cathedral, its unfinished subway network and its peculiar coffee system, we invite you to stay in one of our amazing holiday apartments where you will be able to sip a nice ?cloud? overlooking the ?one-handed? while trying to make any sense out of the unfinished Metro map.

As the saying goes ?Spain is different?, and Malaga is certainly no exception. Witness non-stop history in the making and join us for a lifetime holiday experience.

For more info, visit us at www.solaga.com